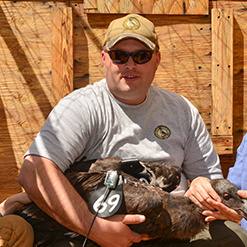 One of the most critically endangered birds in the world, the California condor is slowly making a comeback in Arizona thanks to the efforts of Allen and his team. As the condor program manager at Arizona Game and Fish Department, Allen spends most of his time addressing one of the biggest threats to the species survival—lead poisoning as a result of condors eating bullet-riddled gut piles left behind by hunters.

“[My job] entails a lot of discussion with hunters and hunting groups,” explains Allen, “providing lead-free ammunition, giving presentations to different groups, and highlighting the issue of lead poisoning and how we can reduce that in order to promote ecosystem health.” His team’s work is paying off, with nearly 90% of hunters willingly trading in lead-based bullets for safer ammo that poses less risk to these magnificent birds.

While Allen once thought he’d be an engineer, and idle flip through the NAU course catalog led him down a different path. “When I first saw that they offered a Biology-Fish and Wildlife Management degree, I thought, this is exactly what I do for fun all the time. What could be better?"

Now 16 years into his career, he knows he made the right move. Allen’s favorite thing about his job is that he gets to make a difference in the world. “I feel that this is a sacred stewardship we have as people, and I am happy to be a part of that,” he shares. “Whether I am surveying elk, capturing pronghorn, monitoring condors, conducting snorkel surveys, or working on my computer, I am involved in driving where our wildlife will be for generations to come.”

It’s not all hard work. Allen recalls a time he was in the field and spotted a condor playing with bridge cross members (the structure that gives a bridge its rigidity). “It would flap and flap really hard to get to the top of this cross member, and then would slide down to the bottom. It played like this for quite some time,” he laughs.

Wildlife conservation in Arizona isn’t an easy job, and Allen knows that it takes more than just the team at Arizona Game and Fish to conserve and protect our animals—it takes everyone. His advice? “Use common sense when you venture out into the world. Don't destroy quality places with your activities. Stay on roads, take your trash home with you, be thoughtful and aware of how your actions are affecting others, and we will all have made a better place for everything and everyone.”