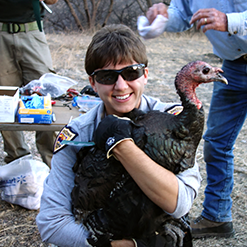 Brittany’s day-to-day life as a wildlife manager is somewhat unpredictable—and that’s just the way she likes it. Her position provided her with the opportunity to continue doing the variety of activities she loves like wildlife outreach and management, with the added opportunities to protect wildlife resources by "catching the bad guys" and keeping her fellow outdoors enthusiasts safe.

“I may start out the day believing I am going to check wildlife water catchments, and then find myself as the first responder to a vehicle rollover accident on the way,” she explains. “Or perhaps I thought I would have a quiet afternoon working on hunt recommendations, but then get called out to help a whitetail doe stuck in a fence. It's not uncommon for me to get a call late at night in the summer about a bear breaking into a shed or a home. Wildlife surveys, criminal investigations and patrols, nuisance or injured wildlife assistance, hunter education and outreach, landowner relations and habitat projects—we do it all!”

It’s the perfect job for Brittany, who spent her childhood captivated by critters and the great outdoors. She began volunteering at a zoo at a young age, and a high school science teacher introduced her to the idea of a wildlife career. From there, she was hooked, working as a fisheries tech while still in high school, getting a biology degree and doing field work while earning a Master’s in wildlife conservation and management.

With her extensive experience in the field, Brit is full of memorable stories about wildlife encounters, but her observation of a coyote’s hilarious attempt to hunt ducks is one of her favorites:

I was out on a frosty fall morning patrolling a deer hunt when I observed a coyote in a marshy area in a grassy meadow. I pulled out my binoculars and watched as the coyote held its nose in the air and sniffed, and then began to creep along through the flooded dead grass. It was clearly pursuing a snack!

As the coyote approached a clump of tall grass it began to pick up speed and then suddenly a handful of ducks exploded from the water, loudly quacking and beating their wings as they took off. The coyote similarly exploded with surprise and took off in the other direction, apparently not expecting such a reaction from its intended meal.

The lure of breakfast was too much for the coyote, however, who stopped and turned around, ears pricked in attention at the ambush point once again. This time the coyote was not taking any chances and began to leap towards the grass, bounding unnaturally high into the air in an effort to see into the tall grass with each jump. After a few such cartoonish bounds, the remaining ducks exploded from the grass and the coyote was left with soggy feet and nothing to show for it. I had to laugh.

I wonder if my supervisor finds it similarly humorous when I try to develop new hairbrained techniques to solve problems.

Brit is unsurprised to learn that a lot of Arizonans don’t realize that that wildlife conservation in Arizona is largely funded by hunters and anglers, NOT by general state tax revenues. She urges people to support the Department, not just for wildlife, but for the passionate and dedicated folks that manage the state’s 800+ species. “I have worked for various federal, state, and non-profit organizations through the years,” she says, “and I am endlessly impressed by our folks here at the Arizona Game and Fish Department. They work tirelessly at all hours of the day and night to ensure the draw runs smoothly, healthy fish are stocked at favorite lakes, that bear that broke into the kitchen is caught, a rancher's well is repaired to restore water for his cattle and wildlife, and there are black-footed ferrets and springsnails completing our natural ecosystems. It's not easy to get it all done without cutting corners, especially in times of personnel or funding shortages, but the folks here at the AZGFD are up to the task!” 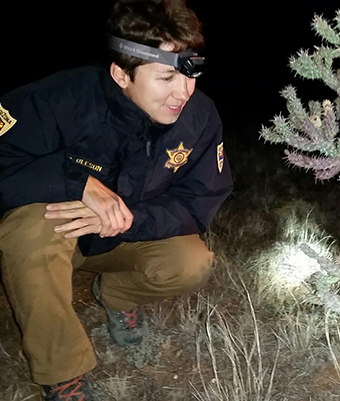 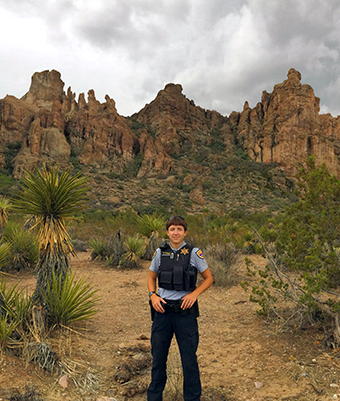 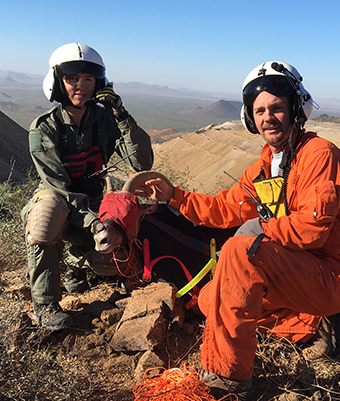