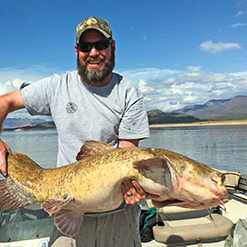 Curt Gill covers miles of waters to ensure fish have good water to breathe in. His career has taken him from Wyoming, where he was a contract biologist who studied and ensured the safety of native fish species, to Arizona, where he now manages the Aquatic Wildlife Program in the Arizona’s Game and Fish Department’s Mesa office.

Curt gets to supervise three fisheries specialists who all share a mission of managing the region’s waters and fish. Two specialize in sport fish, while the other is part of CAMP, which stands for Conservation and Mitigation Program. It was put in place to avoid environmental setbacks for fish in Arizona waters.

“I grew up as an angler in Pennsylvania, where we would camp and fish every summer,” Curt says. Once he realized there were jobs in that field, he was, well, hooked. Curt relocated here from Wyoming to be a fishery specialist, leading sampling activities throughout central Arizona waters.

Curt says that in his career, he has always set goals to leave the resource at least as good and hopefully better. A big achievement was the completion of a two-year project at Canyon Creek, starting in 2005. The department received a grant that allowed the team to help restore the creek from impact of wildfire as well as browsing and grazing by elk and livestock. “We enhanced the habitat and created a better-functioning system to support fish,” Curt says.

Curt has managed the region’s Aquatic Wildlife Program for three years and says it’s been a new learning curve. There there are a lot of t’s to cross and i’s to dot, but his lifelong passion for fish gives him the drive he needs to succeed.