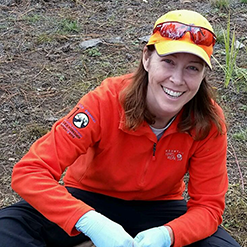 Larisa is not afraid. Being in the wilderness alone for weeks at a time or being face-to-face with a mama bear does not scare her. She’s survived a lightning strike and dodged a bullet — literally.

“Two claims I can make in my career as a wildlife biologist: I've been shot at and struck by lightning. Thankfully, I missed a direct hit in both experiences!”

As Arizona Game and Fish’s small game program manager, Larisa’s tasks are dependent on the time of year. “We’re often out counting quail, doves or rabbits, talking to hunters, banding doves and working to create or restore waterfowl habitats,” she says.

Originally wanting a career as a wildlife veterinarian, her college counselors discouraged her, thinking she wouldn’t find opportunities to work. “I was ahead of my time,” Larisa says. “I’m passionate about wildlife and became a wildlife biologist so I could pursue managing and conserving wild animals and wild places.”

Her favorite part of the job is interacting with the “two-and four-legged animals.” Larisa enjoys observing wildlife in their native habitats and relishes being able to share those experiences with others.

Now, about that direct strike from a lightning bolt (while holding a telemetry antenna in the field) and the bullet she could have encountered: “There wasn’t any lasting damage,” she happily reports. Larisa jokes that both experiences made for great cover letter topics for graduate school and job applications. And the stories certainly prove her devotion to conserving wildlife.

Larisa’s work has provided her opportunities to fly in helicopters, camp, hike and navigate the wilderness, and crawl into bear dens. “I've previously spent 20 winters crawling in-and-out of black bear dens,” she says. “I’ve been about six feet from a coastal brown bear who was just as surprised to find me there as I was to see her that close,” she says. “Thankfully, we both did what bears do when they don’t want a big confrontation. Each of us backed away slowly!”

So, it won’t surprise you that each email Larisa sends has this legendary quote from Helen Keller gracing the bottom: “Life is a daring adventure or nothing at all.”