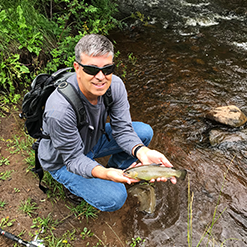 Mike didn’t set out to become a biologist. In college, he originally pursed electrical engineering before realizing that he could make a career out of his interests in the outdoors and fishing.

As Aquatics Program Manager, Mike works with a variety of aquatic species including native fish, sport fish, nuisance aquatic species, invasive species and illegally-introduced nonnative species. And while he spends more time in the office than he’d like, he loves getting out in the field to do surveys or hike off-trail to check on Apache trout recovery streams.

Part of Mike’s job is balancing sport fish with the conservation and protection of Arizona’s native fish—all within a limited amount of water. It’s a delicate balance, and one that requires a lot more research and analysis than most people realize

One of his favorite field stories happened during a field survey in a creek. “Super clear water. No nonnative fish, and it’s just full of speckled dace, spinedace. We just ended up snorkeling it because it was a complex habitat. A lot of fish were in the boulders. Those fish were just so thick it was amazing. You’re looking at within a couple feet within you, several hundred fish. Super quiet. You’re under the water, and it’s all calm because it’s not flowing real heavy, just still water. You’re watching these fish, and you kind of relax. They get used to you and move closer. Just very cool.”